‘Bit rainy out there isn’t it love?’

Google Maps took me completely the wrong way when I was looking for the Willow Tea Rooms, and it hammered with rain. I had pre-empted the weather so I had my red umbrella and an unattractive but practical grey rain coat. As I walked further down a backstreet with more bins than people I ditched Google Maps and headed towards a street showing more signs of life. I didn’t know it but I was in fact on Buchanan Street, and I almost walked straight past the tea rooms which were tucked between Carphone Warehouse and ironically, Whittard of Chelsea. The Art Deco frontage, inspired by Charles Rennie Macintosh, was fabulously inviting.

Relieved to be in the dry I walked hastily up the stairs past some boards explaining the history of the tea rooms and their decor, which I took time to read after I’d eaten. On entering the tea room I saw a sign for the Chinese tea room upstairs – I was too hungry, soggy and shy to go wandering so it’s on my list of things to do next time I’m in Glasgow. To be honest it would probably be a bit lost on my anyway since I don’t actually like tea…

I was shown to a table for two, the high backed chairs were stunning but not particularly practical although they did wonders for my posture over breakfast. I loved the aesthetic of the tea room, the chairs being a talking point for everyone on each table.

I ordered poached eggs on sourdough with avocado, which was handed over within about 7 minutes by a smartly dressed waitress with a big smile. A hunk of sourdough was generously slathered in fresh avocado and my two poached eggs wobbled, almost twerked, on top.

I squeezed the slice of lemon all over and dived in. It was immensely filling and for once I took my time over eating breakfast. When I was done the waitress asked me in her thick Scottish accent if I wanted anything else. I said no but after a few minutes my sweet tooth persuaded me to order a hot chocolate, which came so fast I wondered if the waiting staff were actually clairvoyant. It was rich and creamy and just what was required on a very wet day in Glasgow.

20 minutes later I donned my wet weather gear and splashed through the streets to the Gallery of Modern Art. It was too wet to take a picture so this one is from 2 days later. 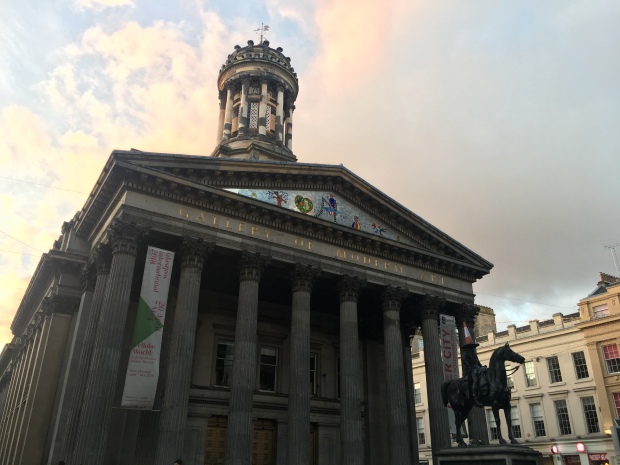